Showing posts from June, 2015
Show all

June 28, 2015
After the big city of Papeete in Tahiti, we sailed in nice conditions for about 4 hours to Cook's Bay on the northern side of Moorea. It is a beautiful, long cove surrounded by stunning green, lush mountains. It is also a very deep cove. We motored around looking for a place to drop our anchor in less than 30 metres! We found a spot near the head of the cove and not too far from the Bali Hai hotel where all the Pacific Puddle Jump events would take place. The next morning we rented a car from Albert's, as everyone does. We paid for 8 hours, but as the attendant wouldn't be there after 5 PM, he told us to keep it until the next day. We picked Heather up at the airport and started a land circumnavigation of Moorea. We stopped at restaurants, shops, fancy hotels, beaches and lookout points. We also drove up to the famous Belvedere for an awesome view of the north shore of the island. Since we had the car in the evening, we drove to the Hilton for a cocktail and to
Read more

A Couple of Days in Tahiti

June 27, 2015
We awoke in the bay protected by Point Venus, Tahiti. We were tired from the rough passage from Tikehau. Some cruising friends knew we had pulled in overnight and radioed to tell us the new marina in Papeete, the capital of Tahiti and just around the corner from Point Venus, was having a half price opening special. After the rough passage, we weren't too keen on continuing on to Moorea right away, even though it would just be 3-4 hours. Then we heard there was fresh water right on the dock at the new marina and several friends were there.....so we went there and ended up staying 3 nights! After being on quiet islands and villages of a few hundred people, Papeete was a busy and crowded city. It felt like the traffic was endless (sometimes there were 20 cars going past) and it seemed like everyone was driving so fast (maybe 50kph/30mph). We ate out too much - but the local food trucks were great! Dina bought more pearls - the Tahitian pearls come in so many beautiful hues: green,
Read more

June 26, 2015
We have a safety rule: we will travel based on the weather, not based on a calendar date. It is a good rule. We shouldn't break it. Safety rules are good, but we were in Tikehau and HAD to go 175 nautical miles to Moorea to meet up with our daughter, Heather, who was arriving on Friday. The forecasted winds were a bit high, but it would just take 24 to 36 hours..... The sail to Moorea was awful. We had strong winds, plus gusts and big swells. We reefed the main and put up the solent (the smaller headsail). After a while, we put in a second reef in the main. We were still over powered and doing 10+ knots. With the large swells the boat was surfing at 13 knots. We were wet due to a couple of rain squalls, plus the swells crashing against the boat were splashing us. Due to the motion and the noise, neither of us could sleep when off watch so we were exhausted. We also realised we were not going to arrive in Moorea until after sunset (another safety rule we have is about not ar
Read more

Tikehau - Manta Rays and a picnic 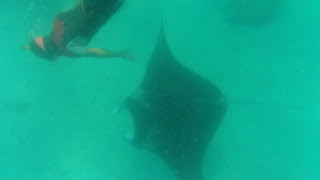 We had an awesome day at Tikehau! It is our last atoll in the Tuamotu Island group before we cross to Moorea in the Society Island group in French Polynesia. We had a lovely overnight passage from Toau. At dusk, a brown-footed boobie landed on the lifeline and, with his large webbed feet, proceeded to balance there the entire night. It was asleep but would move it's tail to balance. Must be a bird thing. We arrived at the pass just after sunrise and went through without a problem. We motored the 8 nautical miles south through the lagoon to anchor of the main village. It is small; one grocery store, one bakery, but two dive shops! We took a walk across the motu to the ocean side and walked to the end and back around to the lagoon side. The next morning we dinghied over to a nearby beach resort (that means several individual thatched roof bungalows on the beach and a restaurant building) to see about an excursion to snorkel with the manta rays. We met Serge, from the Tikehau Village
Read more

June 17, 2015
Toau is yet another atoll in the Tuamotus. This one has some channels into the lagoon, but we went to the western side where there is a false pass (basically a cul-de-sac). Rumour has it the snorkeling there is great and after spending two hours in the water we'd have to agree. We went to shore and met Valentina and Gaston, the local residents. They had just caught a tuna and sold us two kilograms (4.5 pounds) for less than $20. Malcolm seared some of it up for a delicious dinner and froze the rest. Funny thing happened in the anchorage the next morning... A South African flagged sailboat, Toccata, arrived in Toau and anchored nearby. We called them on the radio with the intention of telling them where two mooring balls were hiding. They came on the radio and said, "Hello. Is your sailboat a Montevideo 43?" We were shocked! We so often dread people asking what kind of boat we have as no one has heard of the 15-20 Montevideo 43's built in South Africa. We usually
Read more 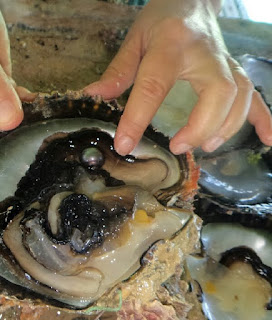 The anchorage in the SE corner of Fakarava was very pretty. Lots of sand and very few coral heads to worry about. Steve, on SV LiWard, arranged a party on the shore for all 7 boats in the anchorage. The locals (6 of them) made fried fish, french fries and BBQ'd meat and chicken. Steve is a musician, so he set up mics and speakers and he played guitar and sang with two of the local men who play guitar and ukulele. One of the women sang. It was a lot of fun! The next day we headed to Rotoava village near the northern pass of Fakarava. Although we heard the diving is good here too, we didn't dive or snorkel. Instead we went to town, ordered pastries and ate some ice cream. The following day, after a breakfast of pastries, we headed to the Havaiki Resort (in town) with some friends for their pearl farm demonstration. It was very informative and fun. We participated in the Pearl Lottery. That means we chose an oyster from the pile and were lucky enough to find a good sized Tahitian
Read more

June 04, 2015
It is approximately 55nm between the pass at Tahanea and the southern pass at Fakarava. We wanted to sail overnight at about 4 knots of speed to arrive at the pass close to slack tide in the morning. We were going too fast with just the genoa so we furled it and hoisted just the main sail. Even with a reef in the main (not using the full sail), we were still sailing over 5 knots. We gybed a few times (made a zig zag course) to arrive after sunrise. Regardless of the speed and arrival, we had a very uncomfortable sail. The wind was from aft but the swells, whether they were on the aft quarter or directly behind, kept the boat rolling from side to side. Neither of us got much sleep. Fortunately, the anchorage here in southern Fakarava is great and we've slept soundly here. When we arrived, we both snorkeled to check the anchor and Dina even got in the water AFTER seeing a small (less than 5') shark swimming around the boat. The pass here in the south of Fakarava reputedly
Read more 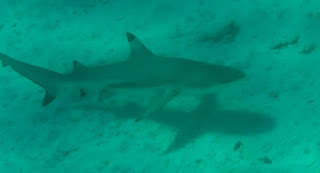 We left Makemo just after sunrise so we'd have lots of time to get to Tahanea. This also corresponded to slack tide so heading out of the pass wasn't too bad as there was just the current from the "overflow" effect. We had a great sail to Tahanea with trade winds moving us nicely. Tahanea is a smaller atoll that is on the way to Fakarava. Our arrival in Tahanea corresponded to slack tide as we had planned. Coming in through the channel was a bit lumpy with all the confused waves but it wasn't too bad. We anchored in nice clear water again and could see some coral heads down below. Malcolm was going to swim over the anchor and see whether it was set nicely. This is a pretty common practice, especially with coral heads around. Dina is very nervous about swimming with sharks. Every atoll has lots of reef sharks so she isn't going to do much swimming or she has face her fear. She decided to go with Malcolm. It would be two minutes, one out to the anchor and one ba
Read more
More posts