We left Bundaberg for the world’s largest sand island and UNESCO World Heritage site, Fraser Island. We upped anchor at 6:30 am and had a lovely beam reach from 7 am until we anchored in Platypus Bay at 4 pm. The day was sunny but it started off cold so we wore hoodies and jackets and we searched the boat trying to find where we had stored the sailing gloves! Between August and November, the shallow waters (maximum depths of 36 metres) of Hervey Bay are home to migrating humpback whales and within an hour of setting sail, we came upon two breaching whales. Then we spotted two pink and grey birds hitching a ride on the backstay. One flew off and the other made itself comfortable on the wind generator (it was tied off) for the entire 6 hour sail to Fraser Island. A quick look in the, Birds of Australia, book identified the bird as a Galah. They aren’t sea birds, so we think they got blown offshore by the wind and were struggling to fly back to land. 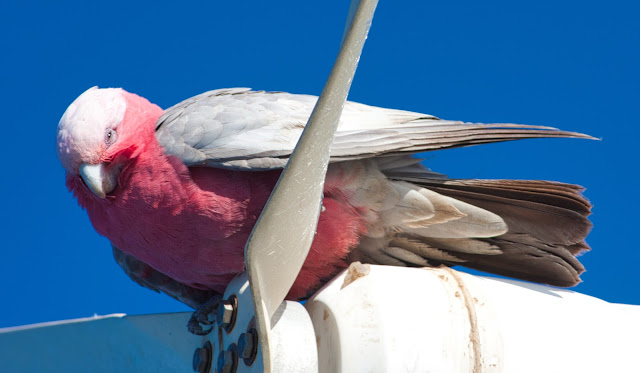 As we dropped the sails to anchor, another whale and some dolphins passed close by, the temperature had warmed up and we were thrilled to be sailing after so long ashore! Fraser Island is a strange mix of sand dunes, sand cliffs, tropical forests and freshwater lakes that host some 230 species of birds. Platypus Bay is a 25 kilometre crescent of white sand beach on the western side of Fraser Island. We anchored off of Triangle Cliffs, an area where the sand reaches up to almost 13 metres from the beach. Some of the higher dunes on Fraser Island reach 260 metres.


After climbing the sand dune we walked along the beach for about an hour before returning to the boat. We could see one other boat anchored a few miles north of us, but we had this whole section of the beach to ourselves. We enjoyed the wildlife and the quiet.


A few days later we motored further south along Platypus Bay to Arch Cliffs. We took our time and spent an hour watching a couple of whales, along with a large tour boat and 10 kayakers. A turtle kept its eye on us as well. Later that evening, as we enjoyed the sunset, two whales swam by. Then in the morning, we heard a very loud breath and rushed outside to see two more whales.

We moved further south along Fraser Island to Moon Point, the northern entrance to the Great Sandy Strait – about 40 miles of the shallow waterways separating Fraser Island from the rest of Australia. From here, until we sailed back into the open ocean at Wide Bay Bar, our boat speed was usually more than the depth underneath the boat. Initially, it felt unsafe motoring at 5 knots in 4 metres of water, but the depths are consistent and the bottom is all sand, so it soon felt normal.

At Moon Point, we anchored in about 4 metres of water and watched it drop to 2.4, 2.3 and then 2.2 metres at low tide. Our boat draws 1.85 metres, which means there was less than half a metre between our boat and the sandy bottom! Our initial anxiety over depth was rewarded with a lively dugong hanging out near the boat.

We continued south and anchored off cruiser-friendly Kingfisher Bay Resort. A dugong grazed near the boat, showing its tail regularly, for a couple of days. One evening we watched a dingo explore the beach. We stretched our legs on a forest path around the resort and had lovely views of Good as Gold at anchor and of the Great Sandy Strait.


We followed another boat south to Garry’s Anchorage and even radioed a sailboat we could see on AIS to ask for waypoints as we were questioning whether there was enough depth for us to enter the anchorage. There are a lot of powerboats and catamarans in this area of Australia and with the shallow waters, we can understand why! A local sailboat, Isabella, directed us to an anchoring “hole” of 5 metres and we settled in with several other boats. With the wind up, we decided not to go ashore, but we were kept entertained by several turtles and dugongs. We found out the next day that salties (Australian saltwater crocodiles) have been spotted in the anchorage and there was a sign on the beach suggesting people keep small dogs out of the water! Yikes!

We next moved on to anchor at Pelican Bay, just before the Wide Bay Bar at the south end of Fraser Island. Not only were there pelicans, but dolphins also came into the anchorage. In this part of Australia, there are a lot of bar crossings, where an outbound river meets up against the prevailing wind and the inbound tide to create some shallows that can be quite treacherous with crazy wave action in the wrong conditions. The Wide Bay Bar is supposed to be one of the worst. The next morning, armed with fresh waypoints from the local marine rescue organisation, and proper timing of the tidal flow, we motored across the bar without an issue. With light winds we sailed the short distance to Double Island Point and anchored for the night.