We anchored next in Lusalava, on the north side of the island of Gaua. We had been told that from this bay there was an easy walk to a stunning waterfall. Visiting onshore, Dina asked many locals and everyone agreed the waterfall was an easy 2-hour walk. So the next day at 9 AM, Dina and Chuck, from SV Free Spirit, set off for a leisurely walk to a reportedly stunning waterfall.

As they walked through the village, people pointed them in the direction of the walk, all saying the waterfall is easy to reach. Dina asked a few people about an informal guide, perhaps a young person who could accompany them. On the outskirts of the main village, a man suggested his son and friend, Eric and Sos, both around 19 years old, could show them the way.

Soon Chuck and Dina were following these kind young men through fairly rough forest. They had turned off the main road and seemed to be following an animal trail. Soon they were in a thick jungle. After stopping to drink fresh coconut milk, the boys admitted they had lost the trail. About 4 ½ hours later, they arrived at the river, near the supposed waterfall.

Exhausted, Chuck and Dina ate the snacks they had brought along for their easy walk. The boys claimed the waterfall was just around a bend. The said it would be in view from the other side of the river. The raging river. Being so close to the end goal, Dina decided to attempt the river crossing. With the boys trying to stand firm in the water, they guided her across. Chuck was not going to be out-done and he crossed as well.


Unfortunately, the waterfall was not visible. The boys now said it was just ahead, back across the raging river and around a bend. At that point Dina gave up. Chuck was in agreement and they all turned around and headed back into the jungle.

At first, they were on a clear trail. The boys admitted that they were on the “principle trail” that had eluded them on the way to the waterfall. Unfortunately, they soon lost the principle trail. After about an hour, they found themselves in dense jungle. The boys had one machete between them and took turns trying to cut out a path. They were often crawling under dense foliage, over fallen trees and up or down muddy slopes. 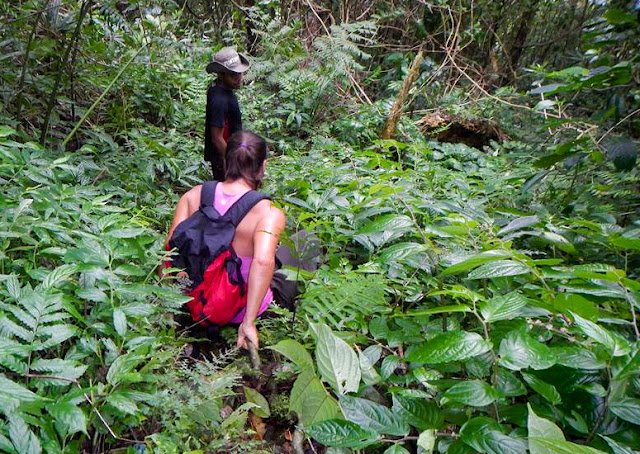 Darkness fell, making the going even tougher. After about three hours, they emerged from the jungle and spent the next three hours trudging in the darkness along a dirt track and then the road, back to where they had left Tubby on the beach. At this point, well over 10 hours, everyone was too tired to speak. The boys help get the dinghy into the water and Dina and Chuck made for the boats.

Fortunately, Chuck had saved the battery in his headlamp for the dinghy ride back to the boats. It was pitch dark and there was a reef between the shore and the boats that had to be avoided. It was about 8:30 PM when Dina dropped Chuck off at SV Free Spirit and a very relieved Lauri.

Malcolm tied Tubby to the boat as Dina made it aboard. Helping her down below, Malcolm gave Dina water, food, a stiff rum and coke and tended to her cuts, scrapes and bruises.  It had been quite a jungle adventure!