We left Matuku before sunset. Once we were outside of the reef, we raised the genoa (head sail). It was very rolly, overcast, rainy and cool. The wind was much stronger than predicted and we were a bit concerned about waves breaking over the stern of the boat. We hoped it would calm down once we were further from the island. The waves did settle into a pattern, but were still very large. A small pod of dolphins joined us until the sun was gone. The boat sailed very well, maybe too well, as we once again were going to arrive at the entrance to Astrolabe Reef earlier than planned. Throughout the night, especially during Dina’s watches, the boat was doing 10-11 knots and she saw 14.6 at one point!

Although we tried to dump wind and slow down, we arrived 4 hours earlier than expected (3 hours before sunrise). We still had lots of wind, but a least the water was calmer because we were downwind of the reef. We gybed back and forth outside the pass for a few hours until we had enough light to see, entered the reef at Usborne Pass and anchored off Dravuni Island. The Chief was away working at a nearby resort (we later learned the village had negotiated with the Australian resort owners that they could use the land as long as they employed the locals at the resort). We did sevusevu with the local Mayor, Isaac. Once we were welcomed, we walked almost all the way around the island.


We met the local Chair of the Village Tourism Committee, Marika. He explained to us that the village had negotiated with Holland America cruise lines to stop at Dravuni Island. Apart from the main island of Fiji, Dravuni is the only other island that receives cruise ships. The village is notified before the ship’s arrival and the locals ready the dock, the beach massage huts and tables, the traditional dance area and craft stalls. It is a very organised island. We stayed for another day, had more fresh coconut and another walk on the beach. It was a lovely place to spend some time while waiting for our friends on SV Free Spirit and SV Roxanne to catch up to us.

Before our friends showed up, we motored just a few nautical miles south to Yaukuelailai Island. It was a lovely secluded island with secluded beaches and wonderful snorkelling right from the boat. The first day the snorkelling was great, but the next day, after the morning rain, we encountered swarms of tiny, clear, jelly fish. They did not sting, but there were so many, it was impossible to see anything!

After four nights in beautiful seclusion, we motored less than an hour south to Vurolevu Island. We snorkelled in the bay and explored a couple of beaches while Tom and Lynn, on SV Roxanne, arrived. We had not seen them since Tonga, almost a year before, so it was a wonderful reunion. Chuck and Lauri, on SV Free Spirit, arrived the next day and we all dinghied over to the NE point where we had heard that manta rays are often seen. We swam with three mantas – one was very large with no tail, another was large with a tear in its flap and a third was smaller (younger?).  The six of us all swam with them until we were too cold or too tired to keep up with them. 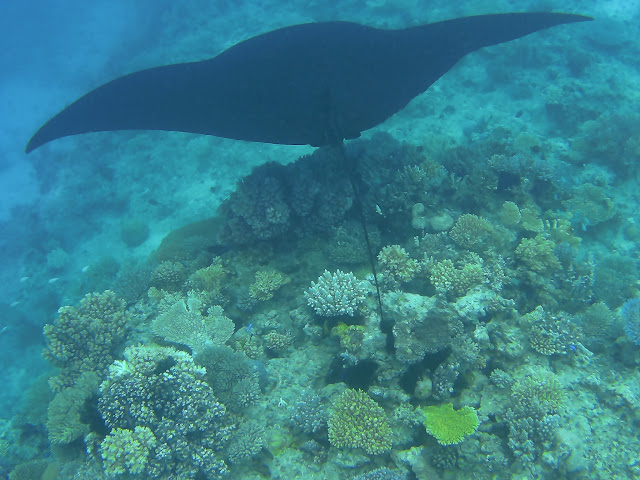 We wanted to dive the famous Naigoro Pass in the Astrolabe Reef, so we motored around to Naigoro Bay in the rain and cold. The next day, Gerald, from Matava Resort, picked us up, along with Tom from SV Roxanne, to dive. There was an out-going current in the pass, which we thought was not good for diving, but the guides returned from a scouting swim and said all was fine.


Dina was having trouble with her buoyancy and mask, so one guide took her back up to the boat a few minutes before the others were finished. The current seemed to get stronger and just before the dive ended, Malcolm and another guide were swept around a corner of the reef and out into the active pass. With the other divers and guides on the dive boat, everyone was looking for Malcolm and the guide. The waves were now so high, it was difficult to see them and the dive boat was having trouble manoeuvring. After 15-20 minutes, Tom said, “There they are!” It still took the dive boat a while to reach them. A rope with a float was tossed out, but the current was so strong, the rope burned Malcolm’s hands and then snapped. The dive boat circled again and tossed another line and this time Malcolm and the guide made it aboard.
After a rest and some snacks, we went to a shallower, inner reef (not out the passage) called, Ozzi Reef. The sun was trying to come out and as this was not as deep, it appeared more colourful. We all thought it was better than the Naigoro Pass.