September 30, 2013
In the grey, wet, early Monday hours Dina and crew slipped the lines and left Vancouver. The plan is to head to Port Angeles to check in and get a US cruising permit. Then, off to Neah Bay and sit waiting for a good weather window.
With Malcolm's injury, he'd be a big liability on the passage.  So he's heading to Grandma's place in San Diego to recuperate.  There, he'll work on perfecting his Margarita recipe (although it probably can't be improved, he'll keep trying). 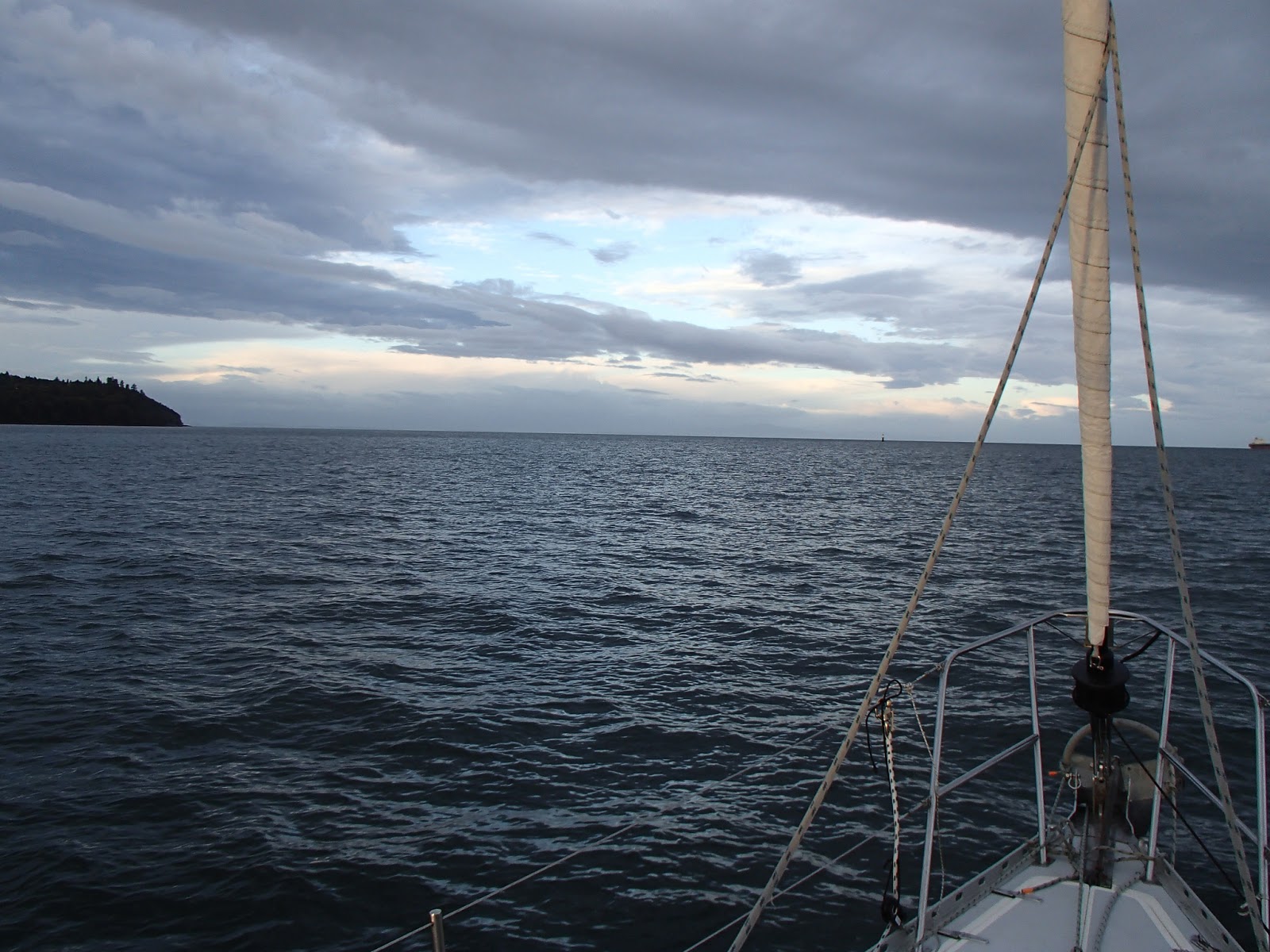 It was a wonderful sail from Vancouver. Gary Peacock, Dennis Giraud, and I left False Creek Yacht Club early Monday morning and had great wind sailing across Georgia Strait. We reefed the main and should have used the staysail, but we rolled in some of the genoa and had the rail in the water. Once through Gabriola Pass, there was still some wind, but right on the nose, so we motored to Victoria.

We had a nice shout out from Riki Tiki Tavi as they headed to Montague and a call from Jennifer and Campbell Good who spotted us from the ferry!

We arrived at Royal Victoria Yacht Club in the dark and were relieved to have Jennifer and Campbell there to welcome us and shine a light on the dock! The drinks they treated us to were also greatly appreciated!

On Tuesday, Bruce from the sailing vessel, Gavia, joined us and we motored to Port Angeles. We checked in with Customs, purchased Good as Gold's US Cruising License, and filled up with fuel, including 4 jerry cans that Dennis intricately secured to the lifelines. My Aunt Peggy Erikson met us at the marina and took us for a wonderful lunch and helped us provision. At this point, I was being told, Dennis likes to eat healthy... The afternoon was spent chatting with my Aunt. The crew fell in love with her and everyone enjoyed her stories.

Wednesday morning we were off for Neah Bay. There was not much wind and it was not in our favour, so it was another day of motoring. We arrived about 5 PM, topped up the fuel (about 14 gallons, compared to the $1,000 the powerboat beside us purchased!), had a quick dinner at the fuel dock, and off we went to round Cape Flattery at sunset.

The first few days were sunny, clear and with light winds. We sailed whenever we could. At night, the stars were amazing and it was thrilling to hear whales surfacing near the boat or to spot dolphins flashing past in the bow wave. I began to worry whether we had enough candy bars and snack pack chocolate puddings for our healthy-eater, Dennis!

We motored around Cape Mendocino, but once around, the winds picked up! The last few days we had high winds and seas. At least they were coming from behind us and pushed us along. We sailed just with the main and it usually had one reef in it, but we still did 7-10 knots. The true wind gauge was not working, but the apparent wind, coming from behind us, was well over 20 and often over 25 knots.

The boat handled wonderfully; she seemed to be enjoying the waves crashing over the bow and surfing down the steep waves. Even the autohelm worked well; better than anticipated in the steeper seas.