November 12, 2014
We got as far north in the Sea of Cortez as Bahia de Los Angeles.  This is a pretty large bay which is quite popular with whale sharks (http://en.wikipedia.org/wiki/Whale_shark).  These are the largest fish in the world, they are sharks but they're slow moving filter feeders.  Malcolm and our friend Bill swam with one near La Paz last April.  In this bay we saw several of them right from our anchored boat, but they never came by when we were ready to jump in and swim with them.  We did catch one on video as it approached the boat and then swerved to avoid us.

We went ashore to get some fresh groceries.  It was hot out, so we stopped at Guillermo’s restaurant for some beer on the patio and Internet access. The server asked if we were from that sailboat out there and Dina said we were.  He then asked us if we’d be able to take a sea horse with us and set it free.  Dina said we’d be happy to and the server left us with no further explanation.  We went inside to find out the story and found the sea horse in a large glass jug.

The sea horse was accidentally captured by some octopus fishermen, and was only discovered when they were offering their fresh octopus to the restaurant.  We took the sea horse (and the jug) back with us when we motored out to where we were anchored.  We tried to take a video of the event but our camera batteries were dead by then.  Needless to say, the sea horse was quite happy to be back in the ocean and waved goodbye to us.

After a few days we decided to move on and started working our way south again.  Along the way we had some more pretty anchorages and some good snorkeling.  We didn’t see our sea horse friend but we saw some colourful fish and some star fish.

We did find some other people after a while.  We anchored in the bay just south of San Francisquito and met Phil and Dave, brothers from Arizona and Nevada.  They fly down in their Cessnas and land on a dirt runway in the field just behind their trailer on the beach. They insisted on giving us some killer Mai tai's.  They went fishing the next morning and motored past Good as Gold to show us the two Yellow Tails they caught and to invite us to breakfast.  The breakfast was awesome as was the company, by the end of the day we had enjoyed some of their fish (sashimi), our bubbly, and had an awesome BBQ dinner. The next morning we sailed away and they prepared to fly back home. 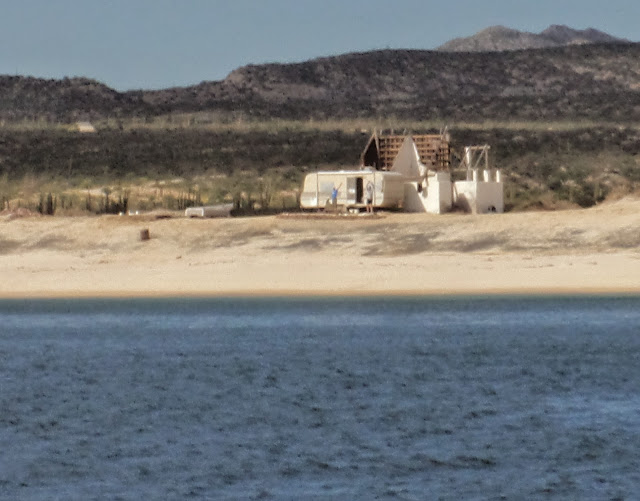