December 26, 2019 - Sydney NSW, Australia
The Sydney to Hobart race is one of the world’s most famous yacht races. It starts in Sydney Harbour on December 26th each year and the boats race south over 1000 km to Hobart, the capital of Tasmania. There were 170 boats entered this year, including five super maxis (custom designed racing yachts, in the range of 100 ft long).

We’d heard from friends that watching the start from a boat in the harbour is amazing. The problem is that a very large number of boats do this so it can be extremely crowded, a little crazy and stressful. The city and the race committee do a great job setting the rules for spectator boats. There is a large “race boats only” area, zones where you must remain stationary and zones where all boat traffic must move in the same direction parallel to the race boats.
The race boats are divided into different classes, with the fastest ones starting first and the subsequent classes starting afterwards at five minute intervals. After looking at the map with the harbour restrictions, along with the race start information, we came up with a plan to go outside the harbour to the “Zulu” mark located one nautical mile outside the harbour. The race boats head east out of the harbour and must pass this mark before turning south.
The weather on the 26th was beautiful and we took Good as Gold out to Zulu mark well before the race started. Malcolm got both cameras ready, one with a telephoto lens and one with a regular lens, and Dina stayed on the helm. At this time there were only about ten other boats out waiting for the start. We weren’t really sure what to expect and what happened over the next 60 minutes was amazing.
About 20 minutes after the starting gun, we saw the race fleet coming out towards us. Along with the first few boats were five helicopters and a large number of other boats with spectators and news people.
Our location was perfect. The super maxi “Info Track” came by first and hoisted her spinnaker as she passed us.

Up next was Scallywag. We later found out that Scallywag was in position for a podium finish, but they hit and killed a shark and suffered a delay getting the carcass untangled from the rudder.

Racing along with Scallywag were two other super maxis that angled a little further east (for better wind or calmer water?) and didn’t hoist their spinnakers. The sea had been quite calm when we were waiting for the race, but with only the first five race boats past us, along with a hoard of spectator boats chasing them, the sea state was getting crazy. The boat wash and waves knocked us around a fair bit.

Dina held the helm firm, slowly motoring up and down the race course, out of the path of the racers and dodging other spectator boats and jet skis. Malcolm held on to the boat and kept taking photos. 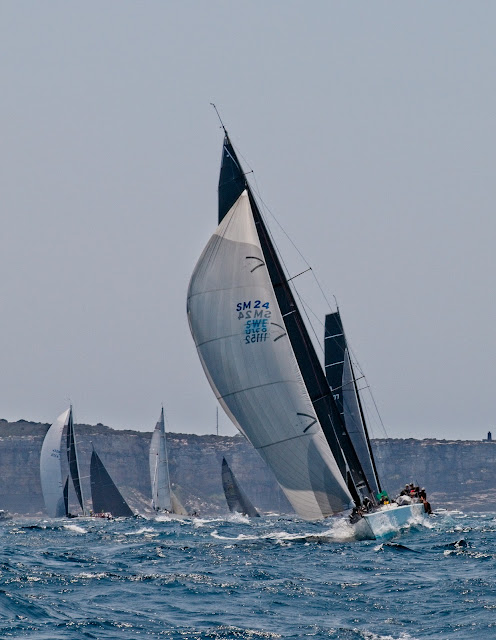 It was an amazing experience that ended almost as quickly as it started. After the race fleet had passed, we motored back to the anchorage at Blackwattle Bay, in the city centre, to begin planning for the New Years Eve fireworks and provisioning for our passage south to Tasmania.