Kiteboarding and a little problem with the wind generator

July 11, 2016
As we sailed back east around the north side of Viti Levu we headed into the wind. The first day we motored for almost 4 hours until the winds and waves coming towards us made it unpleasant. We anchored in Vitoga Bay for the night. The next day we got an early start and motored into the wind and waves for another 4 hours then dropped anchor in Vatia Bay. For the final push to Nananu-i-ra Island, we set off at 7 AM and arrived about 6 hours later. This bay seemed to be home to some big jellyfish, which a local told us were harmless. We still didn't touch them and didn't swim until the next day when they all seemed to be gone (perhaps the wind or current moved them along?)
We went to Nananu-i-ra to take kite-boarding lessons from Warren Francis, the owner of the Safari Island Lodge. Unfortunately, Dina had hurt her back and was unable to take lessons. However, Malcolm did do the standard progression from flying the kite while standing on the beach, to flying it while dragging through the water, and began the difficult process of putting it all together with having a board on his feet (the hard part). He did “Superman” a few feet above the water a few times but had a lot of fun and is hooked on the sport.

We spent over 10 days in Nananu-i-ra.  A lot of the time we were waiting for good wind for kite-boarding. Fortunately our friends on Free Spirit, Chuck and Lauri, caught up with us and we had time for exploring and bonfires on the beach.  Malcolm tried out the “Time-lapse video” feature of our new camera for one of the typical sunsets.

The wind can be pretty strong between the two main islands of Fiji, Viti Levu and Vanua Levu, so we motored through the reef along the NE side of Viti Levu and anchored in the lee of Naigani Island before launching on the first leg to Vanua Levu. The next day we motor sail most of the day to Makogai Island in the Koro Sea between the two main islands.


Makogai was devastated by the Tropical Cyclone Winston. Volunteers, on sailboats and camping ashore, were there helping to rebuild houses and schools. We visited with David from SV Anahata who was going onto his fifth week of working with the Makogai community.

After visiting with David over a nice breakfast, we left for nearby Namena Island. The island is a nature reserve and the reef around Namena is famous for its dive sites. We entered the reef into the Namena lagoon and hunted around for a coral and debris-free area to anchor. Unfortunately, the island was ravaged by Winston in February.  The trees and vegetation is returning and so have the birds – Namena is home to a Red-Footed Boobie colony, along with frigates and other sea birds. The eco-friendly dive resort was reduced to just the foundations of the former buildings. Without any facilities at the island, diving has to be arranged in Savusavu, and a premium paid for the transport to and from Namena.
Instead of diving, we spent a few days of snorkelling and then we set sail for Savusavu.We were having a fine, sunny sail from Namena Island to Savusavu. A large pod of small, dark dolphins swam along with the boat for a while.  Suddenly, we heard a loud crash and shattering sound from our aft deck. After a few minutes of looking for the cause, we finally saw that the wind generator pole had disconnected from the stern arch. Instead of quietly falling into the ocean and ripping out the wires, it fell directly onto one of the two large solar panels on the arch. Instead of the wind generator blade breaking, it pierced the solar panel and was hanging off of it! The entire panel was shattered. 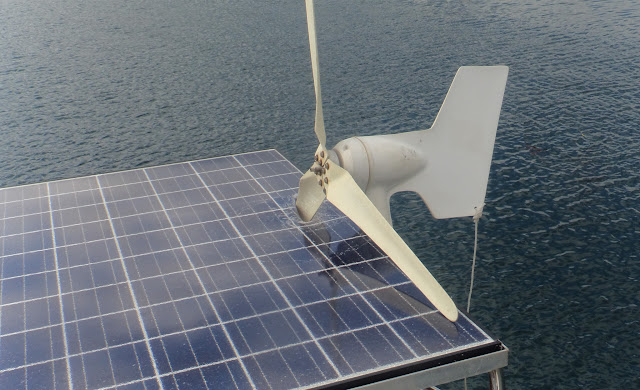 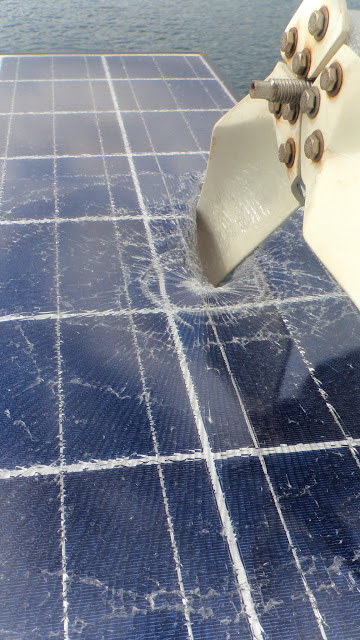 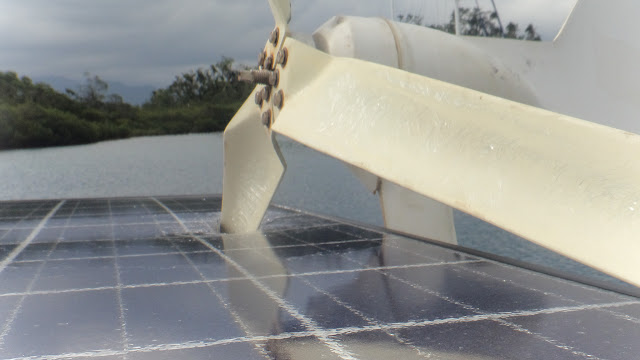 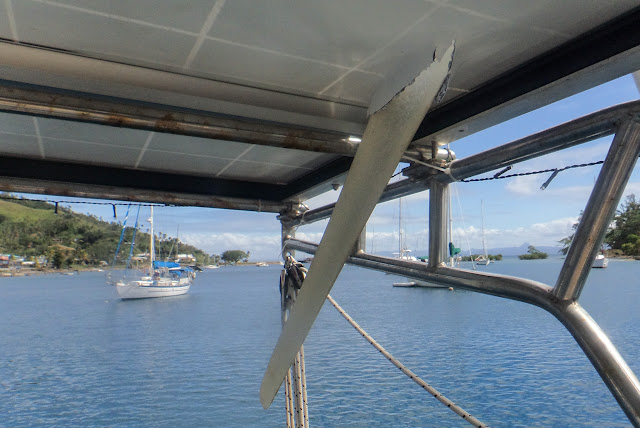