October 12, 2015 - Vava'u, Tonga
One of the most interesting places we’ve seen here in Vava’u is Swallow’s Cave. We were anchored nearby with Free Spirit and Sea Note, and were told it is best to go there in the late afternoon when the sun shines into the cave. It was a bit far for our little dinghy, so we grabbed our snorkel gear and hitched a ride with Ray on Sea Note. He’d been before and enjoyed it so much he was going a second time.

Above the water, the cave is probably about 40 feet high, 40 feet wide and goes back about 100 feet from the entrance. Ray drove his dinghy in and tied up to a rocky outcropping inside the cave. Ray told us the water was plenty deep enough, so we put our snorkel gear on and jumped in, not knowing exactly what to expect!

WOW!! The water in the cave is crystal clear, the sunlight is streaming in from the cave entrance and there are thousands of little fish swimming in tight “fish balls” which move around throughout the cave. It is surreal. We spent quite a while swimming in the cave, watching the fish balls moving all around us and exploring the nooks and crannies.

A week later several of us went with David on his boat Anahata, to explore Mariner’s Cave and Swallow’s Cave. The first stop was Mariner’s Cave, which is hard to find because the entrance is about 6 feet under the water. On her second attempt Claudia, from La Belle Epoche, found the cave for us all.

Getting in to Mariner’s Cave is scary the first time. It requires diving down 6 feet and swimming into the pitch black entrance of the cave mouth for about 15 feet until you can surface in the large air pocket inside the cave. David had been there before so he went into the cave and came back several times to show us nervous people that it was no big deal.

Malcolm’s first attempt was aborted when his brain told him that swimming into a dark underwater cave is SCARY! Malcolm and Chuck were ready to forget about this stupid cave when Dina followed David in. Then Chuck said, “Great, now us guys have to do it”. David came back out to lead Malcolm and Chuck in. Dina was left inside laughing about how easy it had actually been.

There is enough light coming in the cave mouth that we could see how easy the entrance actually was.  As we floated there the surge came in from the ocean outside. Each surge compressed the air inside the cave and created an instantaneous dense fog that quickly dissipated when the surge ebbed. We felt the pressure change with each surge and had to clear our ears as though we were diving. Exiting the cave was easy because we could see where to go and were no longer afraid.

We left Mariner’s Cave and went over to Swallow’s Cave, in time for the late afternoon sun. Most of the people on David’s boat were going to scuba dive in the cave. When we got there, another boat was dropping off some divers. It might have been fun to dive to the bottom of the cave, but with so many divers at the bottom, the fish balls were all hanging out closer to the surface. Those of us snorkeling were completely surrounded by fish balls for another great experience. 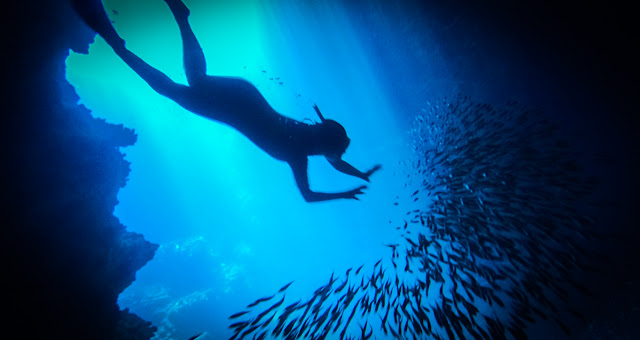 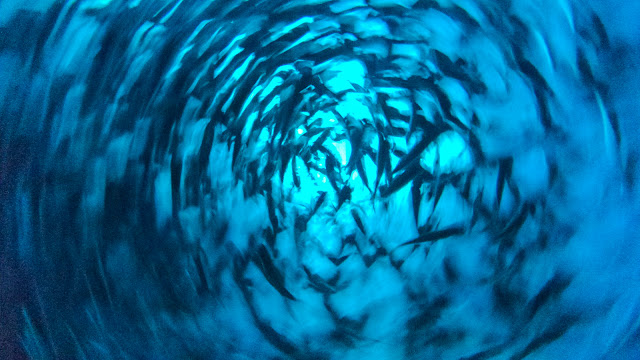 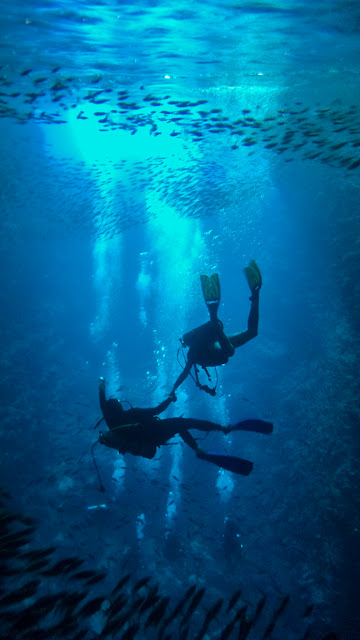