September 16, 2015
This time of year, humpback whales have come to the warm waters in Tonga to breed and give birth. We saw some humpbacks as we approached the Ha’apai group and have seen more every day since. Sometimes we see (and hear) the large adult whales breaching (coming up out of the water and splashing back down) in the distance and sometimes they come close to us. We’ve seen some young calves with their mothers and some males trying to show off to get the attention of a nearby female.

Here are some photos and descriptions of our best experiences....

We took advantage of a few days of quiet wind to anchor out at a tiny island (Hakauata) which seems to be a kindergarten for humpbacks. As we approached the island, one young whale came swimming over to check out Tubby. It was about a boat length away when its mother finally swam between it and our boat and escorted it away. A second youngster was practicing breaching right in the tiny bay where we wanted to anchor. It was inconvenient, but we put the boat into neutral, got the camera and watched it practice jumping and twirling. After a while it must have been nap time because the activity stopped and the youngster and its mother swam away.  That gave us some space to move in and anchor, after which we spent the rest of day up on the balcony watching the occasional whale pass by. It was a rough day! The next morning we were woken by the blows (breathing) of a large whale sleeping next to us!

The uninhabited islands, all the whales, the sun and the friendly locals all made it hard to resist staying out among the islands, but we did need to head back to Pangai for a few more provisions. We almost didn't make it into the town harbour due to all the freakin' whales! Our first encounter was with two who were tail slapping and breaching. We lost track of them, but then they surfaced about 10' off our port bow! Yikes! They are big! Next we saw a few more and circled around for 10 minutes to watch them. Lastly we saw a mother and calf surface a little ways in front of us. We put the boat in neutral and ran to the bow as they swam over to us! As they turned away, the calf must have been 5' off our bow and the mother went under our boat! It was awesome! 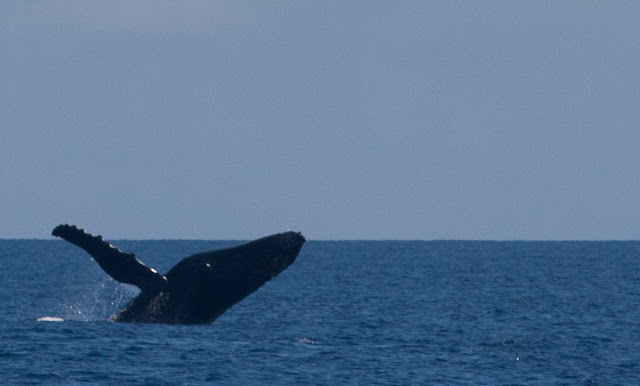 A few days later we headed to a northern anchorage in the Ha’apai group in preparation for the 50 nautical mile jump to the Vava’u group. Along the way we passed what Malcolm describes as “Whale school”. First we saw a youngster attempting a few breaches. That was really cute and we got some nice photos. Then mom demonstrated how it is really done! Wow! Junior did a few more, as did mom. Ten minutes later a tiny calf was slapping its tail nearby. We slowed down to watch, and sure enough we saw mom slapping her tail as though she was showing her baby how it’s done. After a bit of this, mom did some pectoral fin slapping. We saw the baby’s tail in there next to mom but no baby pec’s today. 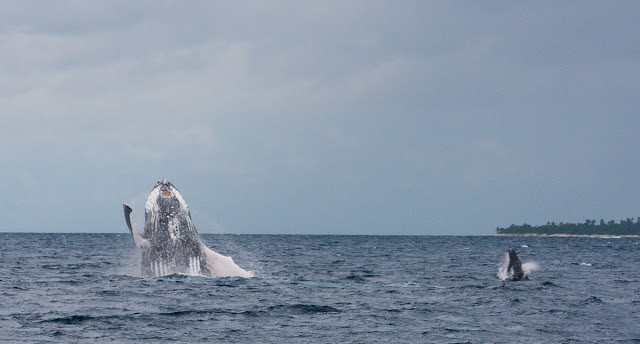 On our way north to Vava’u, Malcolm was on lookout when two very large humpbacks breached about 10 boat lengths directly in front of us. We were sailing along nicely with big wind and there wasn’t much time to do anything other than continue on our present course and assume the whales knew we were there. One popped up again, a lot closer to us, but off to the side a bit! Dina came up to the cockpit and we were looking forward when one of them came up beside us for a breath and perhaps a look at us. The noise from its breath was quite loud! The whale was just 15 feet away! As we continued north we watched behind us and saw the two whales breaching some more.
Tonga