September 16, 2015
Tonga is made up of four different island groups, each separated by 50 to 100 miles. We are in the Ha’apai group, which is sparsely populated and less visited than the other areas. 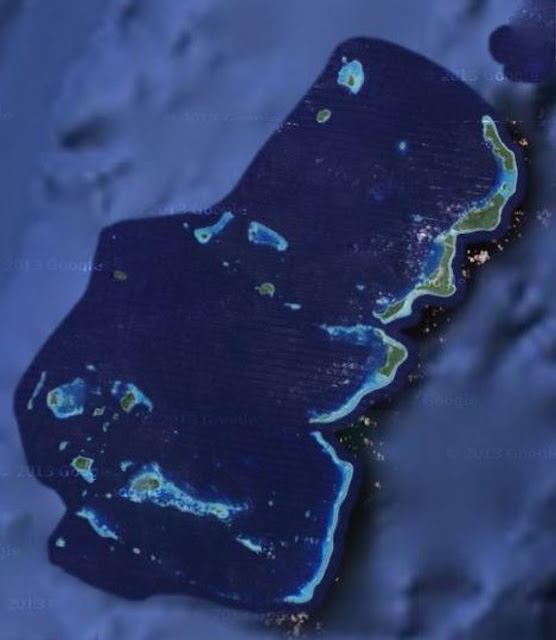 We found a “crowded” anchorage (two other boats!!) in behind the lovely island of Ha’afeva. When we went ashore, many of the villagers were heading back from church and would stop and talk to us. A few invited us to their homes for lunch. We accepted an invitation for the next day and were asked to invite the people from the other yachts.

It was a windy and rainy night, but our host still went out and grabbed some lobsters off the reef for our meal. Tom and Lynn from SV Roxanne also accepted the lunch invitation, so the four of us grabbed some items from our “giveaway” piles and headed to the village. The food was great, with fresh lobster and fish complemented with some cassava (kind of like potato). Our host invited us out lobster hunting (it isn't fishing as you just grab them with your hands or spear them) but there is no way Dina is going into the water at night. Malcolm is allergic to lobster, so he’s not going either.

This region of Polynesia has some large fruit bats, called flying foxes! They can be the size of small dogs, and they are quite cute! Dina had been asking about them, so our lunch host found one to show her and brought it to the dock (She asked him not to kill it! The locals do eat them). It was a small one, black with a brown head, huge eyes and sharp little teeth (they do bite, otherwise we would have a boat pet). We hadn’t expected him to do that, so we didn’t have the camera with us. Try a google image search for “Tonga Flying Fox” and you’ll probably see lots of photos, some of them better than we would have done.

Next stop was the island of Matuku, just 5 miles south. We arrived on a school day during the lunch recess. There were 20 kids on the beach waving at us when we pulled in. Malcolm took a small kite ashore and was swarmed by the kids who led us down the beach to their school. The kite was a big hit, as was the camera. Tongan children love to have their pictures taken. After a while, the teachers arrived and the kids went in for afternoon classes. We walked around the island, which took about an hour, and then back to the boat. 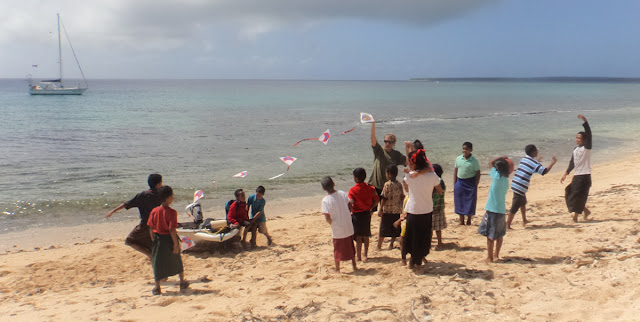 We caught up with SV Roxanne again at Tofanga island. Tom is an avid kiteboarder, and lent us his trainer kite and showed us the basics on the beach. Malcolm is ready for the next step (dragging through the water), but Dina needs a bit more time on the beach. Tom didn’t have a harness for us to borrow, so a bit of man-handling was required. Dina is going to try it again, in less wind and wearing diving weights, so she will get dragged across the sand a little less... Glenn, the owner of the dedicated kitesurfing resort, Fanifo Lofa, was also on the beach with a few of his friends from New Zealand. They offered encouragement and impressive demonstrations. Looks like we are in the market for a kite and gear! 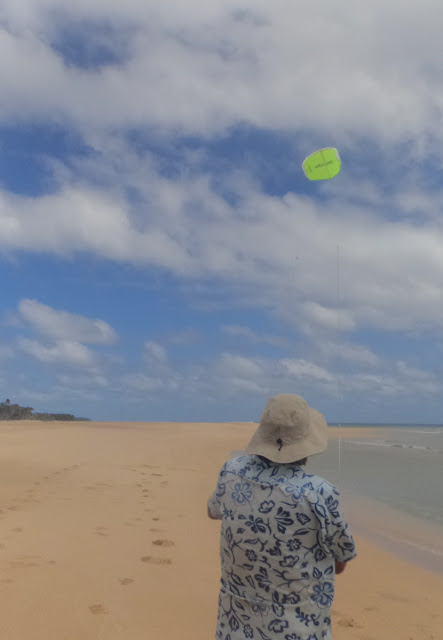 We’ve spent three weeks in the Ha’apai group, visiting about 9 islands, and we could happily stay longer. However, we’ve eaten most of the food on board and, probably more importantly, drank all the alcohol. Since there isn’t much to buy here in the Ha’apia group, we will head to the hustle and bustle of the Vava’u group, 50 miles north, where lots of our friends, and most of the boats that crossed the Pacific, are located.
Tonga