January 30, 2015
Sometimes we have to fix things and sometimes we want to make changes to things.  There is a “to do” list that grows, changes, shrinks, gets re-written and gets re-prioritized.  It’s actually not a list, but a “Boat Maintenance” notebook that Malcolm fixates on from time to time (but that’s a whole other story).

The new solar panels took over the radar arch and left the antennas and radar dome waiting for their new home. “Move antennas and radar to new post and connect cables” has been written into the Boat Maintenance book.  There is an “H” next to this for HIGH priority, and an asterisk next to the “H” for “Must do before leaving Mexico”.

Last year, we found that one of the steering cables was slightly frayed. “Replace steering cables” has been in the Boat Maintenance book ever since.  It also has an “H” and an asterisk.  If we’re actually going to go to the South Pacific, we better get these things done.

First, the steering cables.  We’re at a dock so we probably don’t need to steer the boat much.  The old cables are stainless steel and run over some pulleys and such from the wheel to the rudder.  Taking them out is pretty simple.  Once they were out, we discover a second frayed spot.  It’s not like they were going to break right away, but it was certainly time to replace them just to be sure. Our new cables are not steel, it’s “Amsteel Blue” - a synthetic rope which is just as strong.  A bit of measuring, a bit of splicing, a bit of running lines through hard to reach places and there we go…job done.

We’re still at the dock, but the rudder turns when the wheel turns! Hmmm, time to leave the dock and actually steer the boat!!

Good news!!! We left the dock and the steering works.  Of course it works, there was nothing to worry about.  Why wouldn’t it work?  Update the Boat Maintenance book, cross off that steering thing!! Next job, set up the antennas and radar on the new post.  That’ll be easy!

Hmmmm.  How high is that antenna post? How far do the cables have to run to get there? Oh, they are further away than they used to be?

Hmmm, who is coming down to visit us and can bring some supplies?  Tim is coming down from Toronto!! Place the order!  Tim was great. He got cloudy weather during his visit, but it was warmer than Toronto and he brought a couple of new antenna cables for us, so it was all good.

More about Tim and other visitors later… How are the cables getting from the post to the inside of the boat?  Make a new hole in the boat?  Where?? Let’s just start by getting the cables from the top of the post to where the hole is going to go.

Rob (from Avant) to the rescue!
We use two magnets to pull a thin piece of whipping twine (think dental floss), to pull a medium size line to pull an antenna cable…repeat until done!  This takes a full day at anchor.  Rob is happy to help, his better half Deb is happy to have him tinkering on someone else’s boat, Malcolm gets a nice view from on top of the antenna post.  The cables run through the post…How are they getting into the boat?

Sure, let’s drill a hole in the boat.  It’s way above the water.  With Rob’s supervision, it all works out well.  Hmmm, maybe he should come over more often (Deb would appreciate it).

New cables go into the hole. Radar connections go into the hole….A bit of wiring on the inside and the GPS works, the Radar works, the backup VHF radio works, the satellite phone works!!  Yeah!!!  The antennas cast some shadows on the solar panels but there is still a lot of power there!  Yeah!!!  Update the Boat Maintenance book, cross off that Antenna Post thing!!

Finally, one of the most important rules about doing boat work....If it involves going up the mast, take a camera. 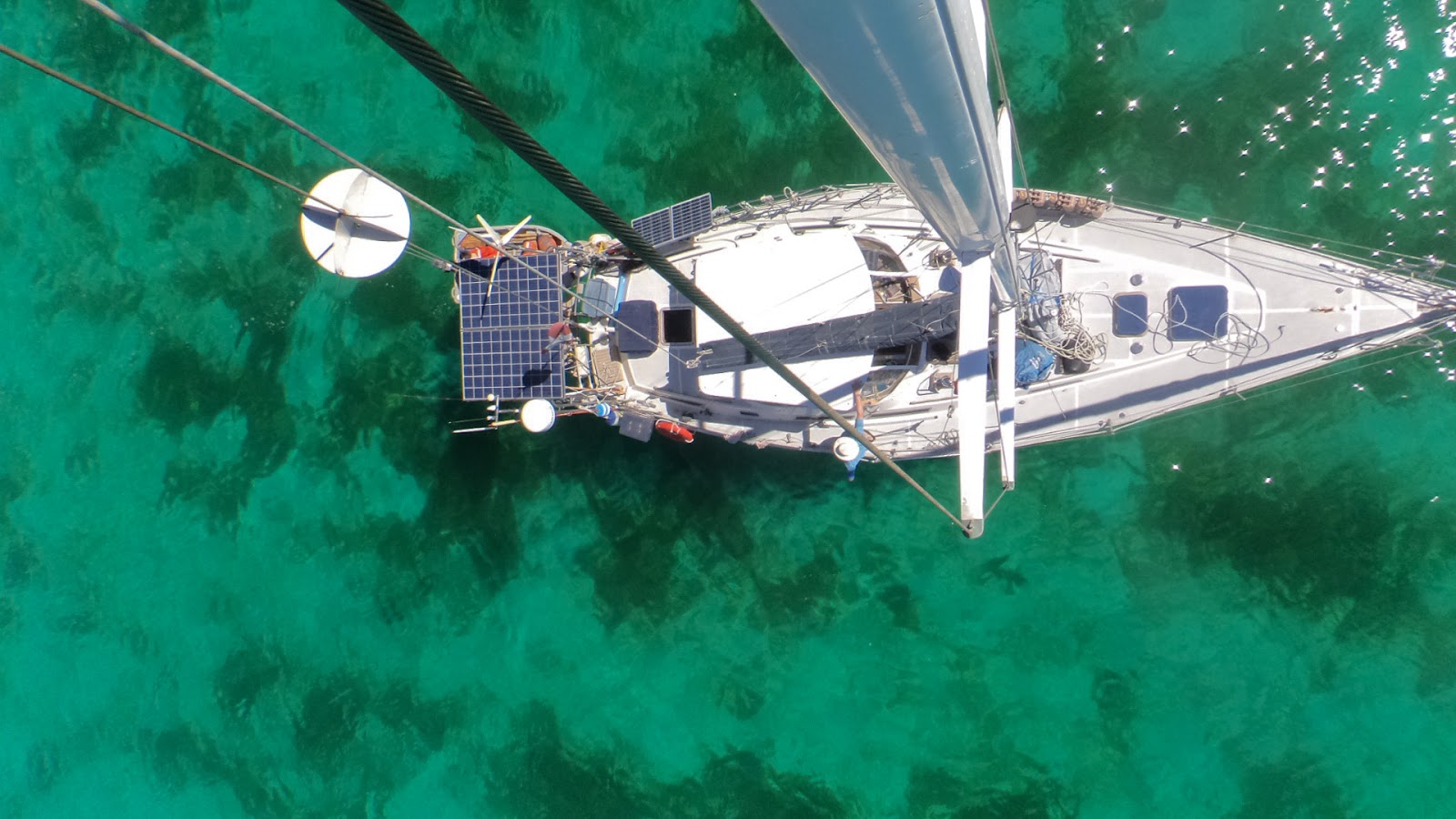