December 18, 2013
Manny and Nicky got settled into the forward cabin and we all toasted to their arrival with spiced rum and root beers. While on shore, we had arranged with the hotel owner to send a panga for us for dinner; we did not want to drag Tubby through the mud again. During dinner, Manny and Nicky made arrangements with the hotel owner, Fito Gonzalez, to have his brother drive their rental car to Cabo San Lucas. Fito had huge hopes to develop San Carlos into a tourist haven. While the villas looked lovely and the food was delicious, the long and tedious, dog-legged, channel entrance to reach San Carlos does not make it inviting. Not to mention the need for a dock… most cruisers anchor just inside Magdalena Bay at Puerto Magdalena and probably won't want to take the extra hour or two to get all the way to San Carlos.

The next morning we left San Carlos and stopped for a picnic on the beach beside the channel. 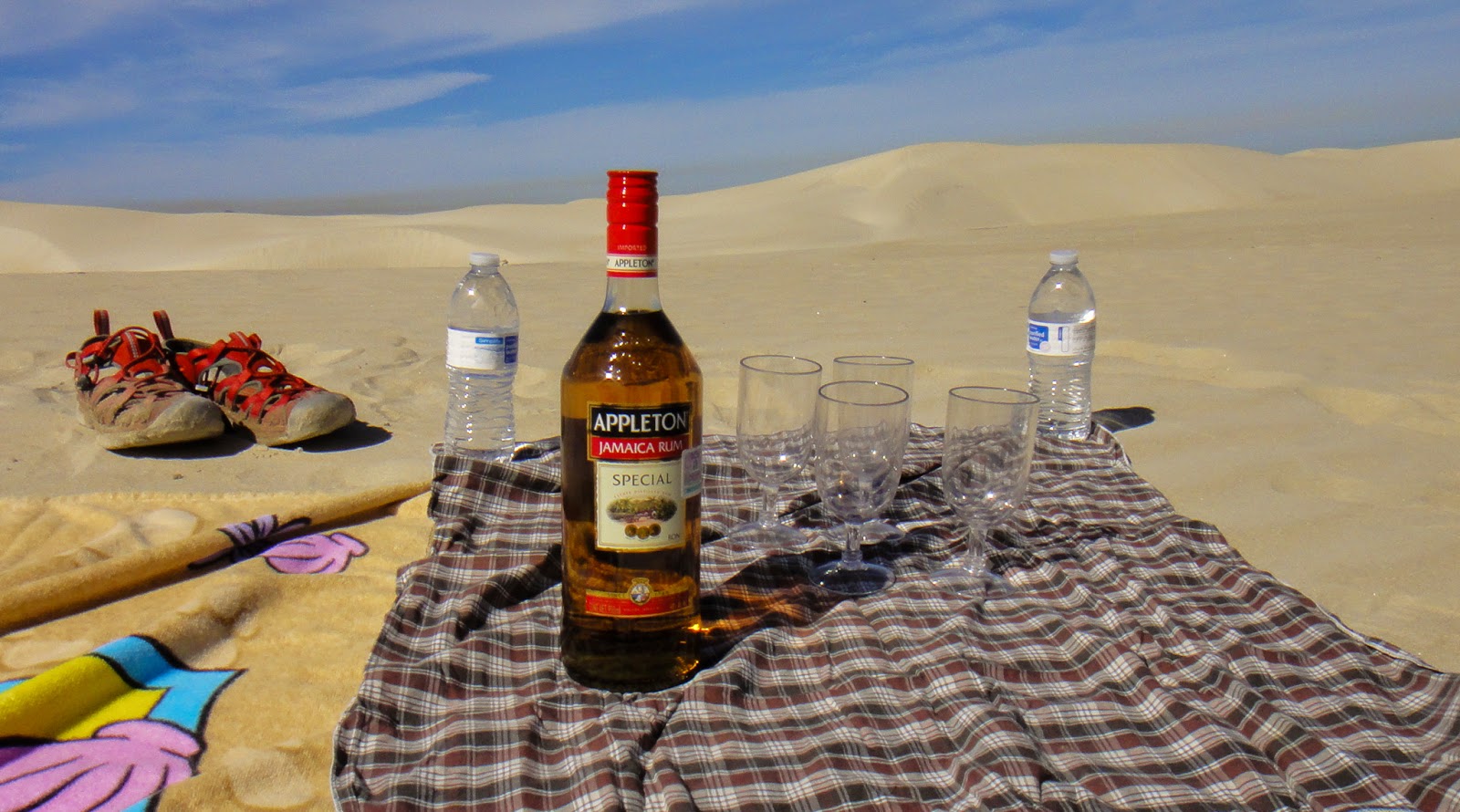 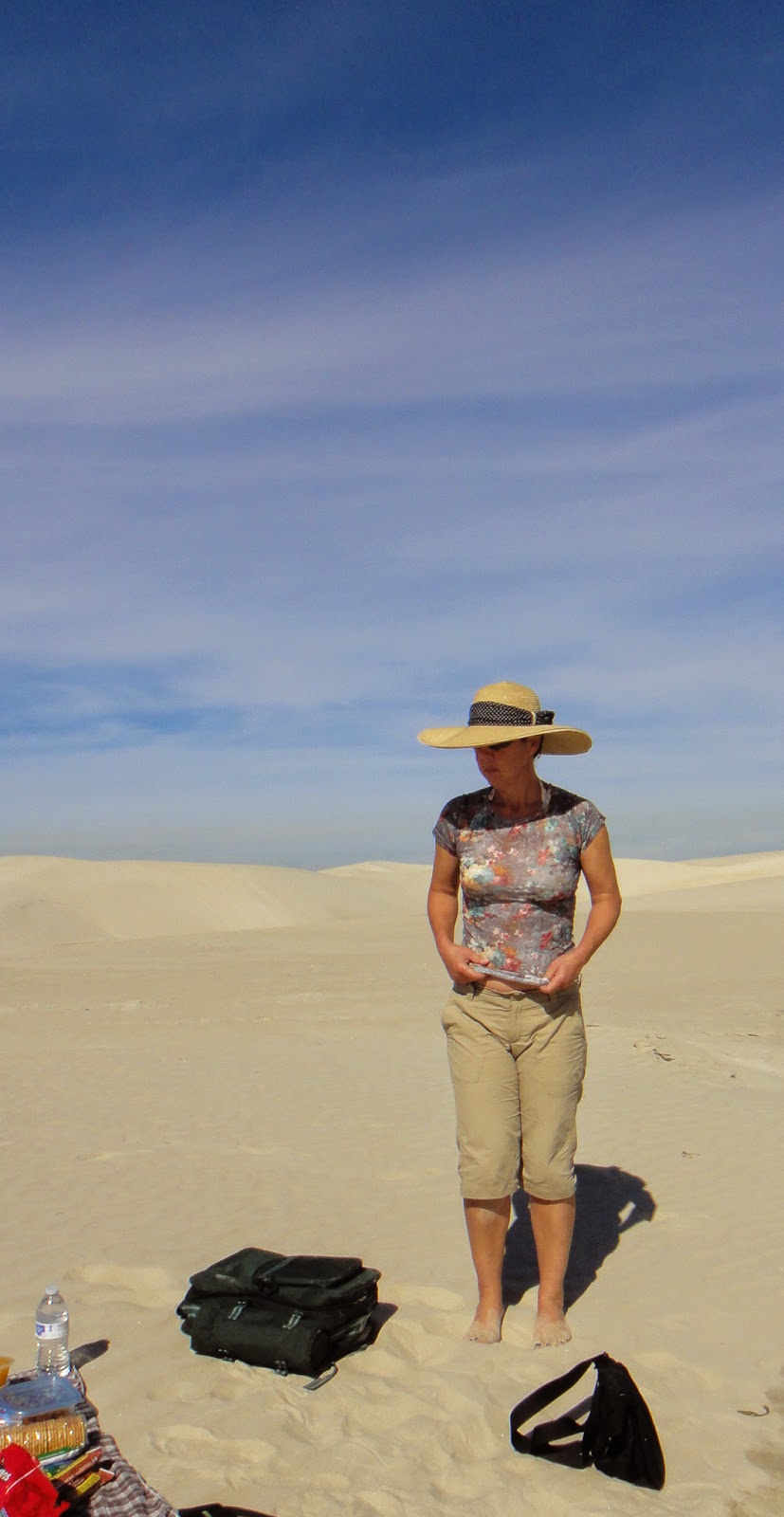 After the picnic we continued on to Puerto Magdalena where we could anchor for the night. It is a quiet fishing village that boasts a restaurant and a small shack as a grocery store. If you arrive on the right day, the store may have chicken, some eggs, potatoes, tomatoes… So much for provisioning for guests!

The residents of Puerto Magdalena make a living from the sea and when we were there it was octopus season. None of us were interested in cleaning and preparing a fresh octopus, so we just had cold beers at the restaurant.

Nicky is a magician in the galley! With limited provisions she made a fantastic dinner.

The next morning, after a great breakfast made by Nicky, we were off to look for whales and head towards Cabo. Heading south outside the Bay, we had great wind and sailed on a wonderful broad reach with the gennaker flying.  It's about 30-40 hours from Magdalena Bay to Cabo San Lucas, so we're a bit concerned about how the guests will handle such a long passage and night sailing.  We didn’t mention to them that we didn’t have enough fuel to motor all the way and would need wind.  Not to worry, however, the weather cooperated, visibility was great with the full moon and Nicky is an Astro-Physicist! Although she’s been working on the Cassini mission (Saturn) and New Horizons (Pluto), she also knows quite a bit about stars. It made the night sailing way more fun!

We sailed the entire next day with much need to adjust the sails or course. In the late afternoon, we gybed to head inland toward Cabo San Lucas.  The gennaker became tangled and ended up with a small rip – oops! Good thing Carol Hasse from Port Townsend Sails sent us the sail repair kit and recommended the book, Sailmaker’s Apprentice!  We’ll have to fix that sail later.

As we closed in on Cabo, a whale showed up and swam beside us in the moonlight for a while. With the light of the full moon, we anchored off the beach and fell asleep to the sound of the surf. It was nice and warm in the morning, so Malcolm (and Manny) finally got to jump into the water from up on the bimini. 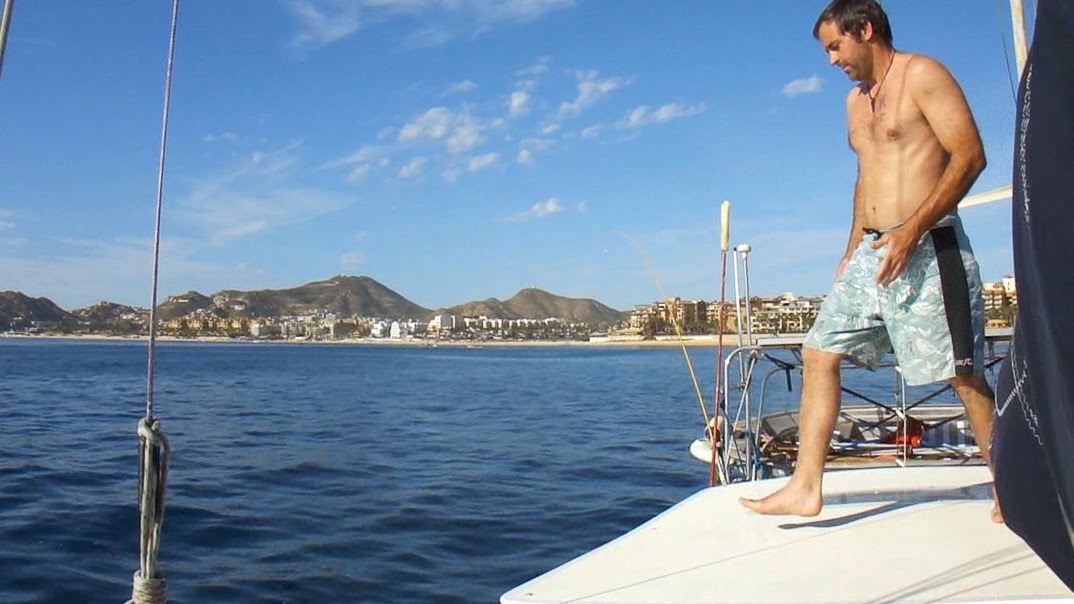 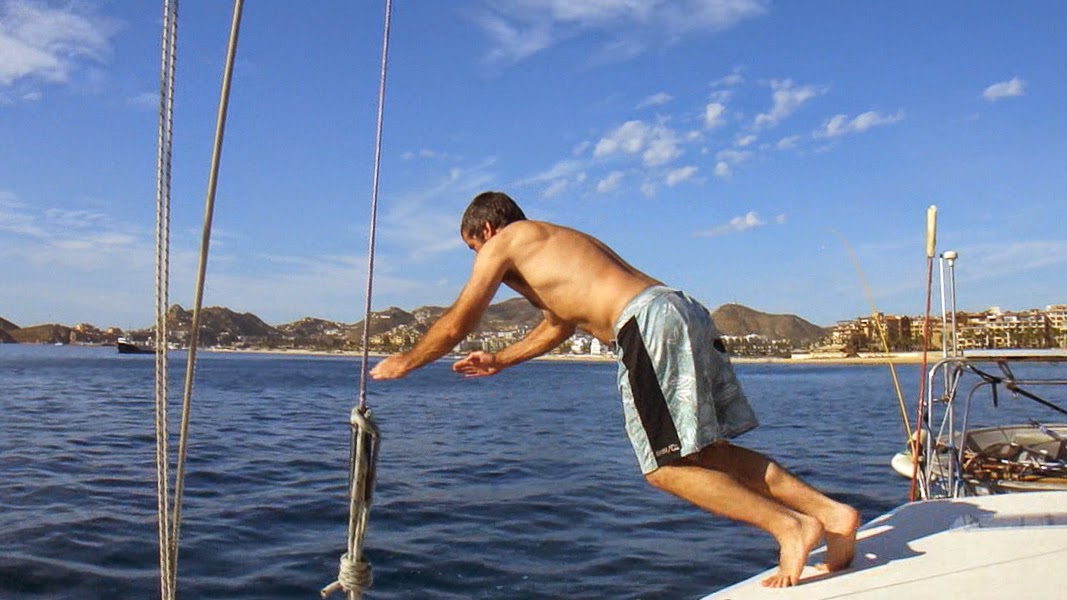 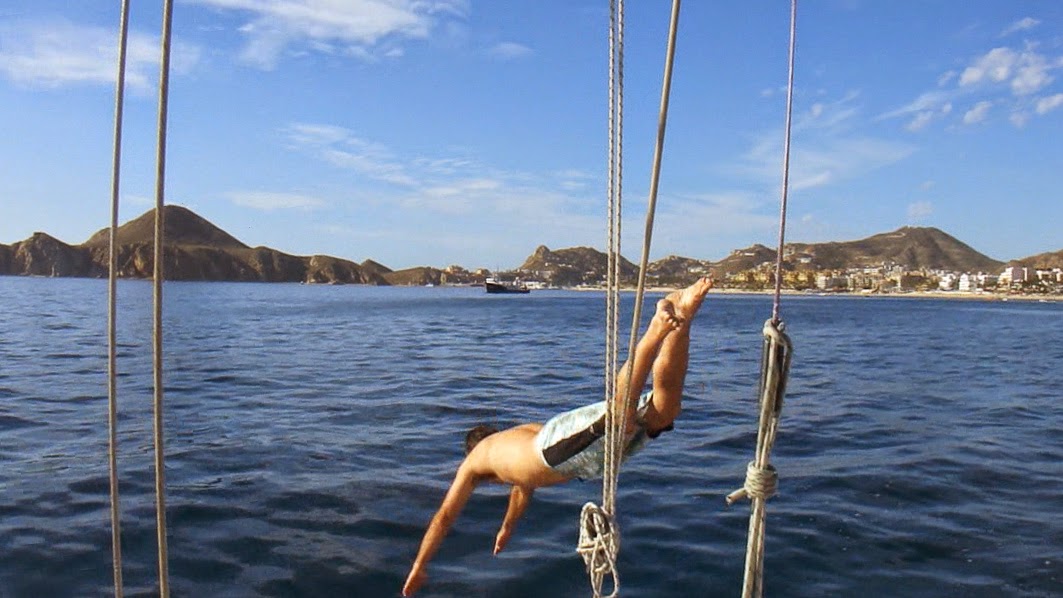 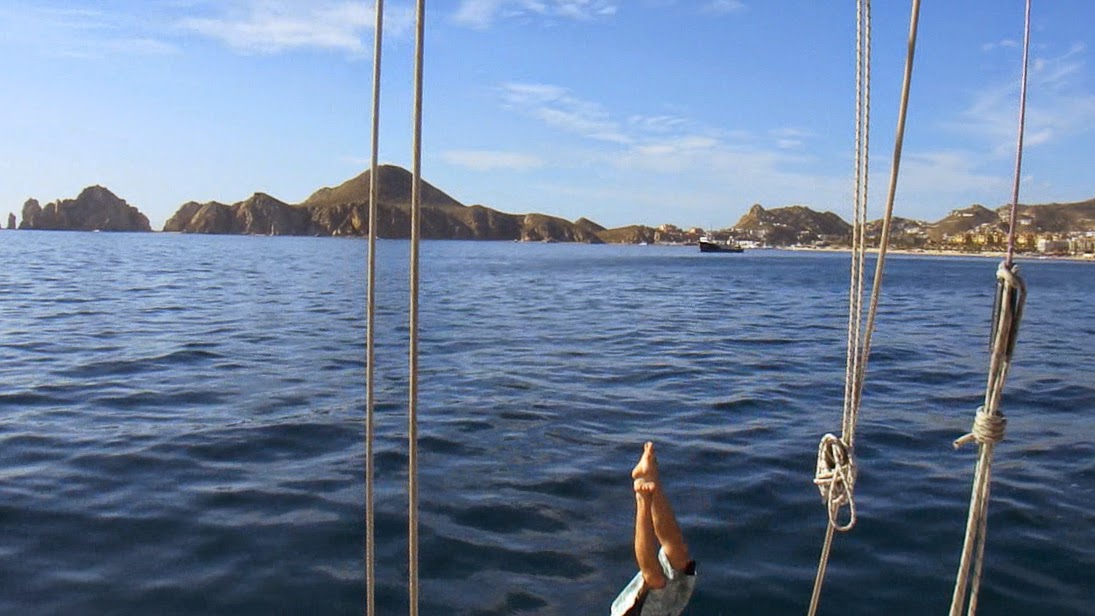 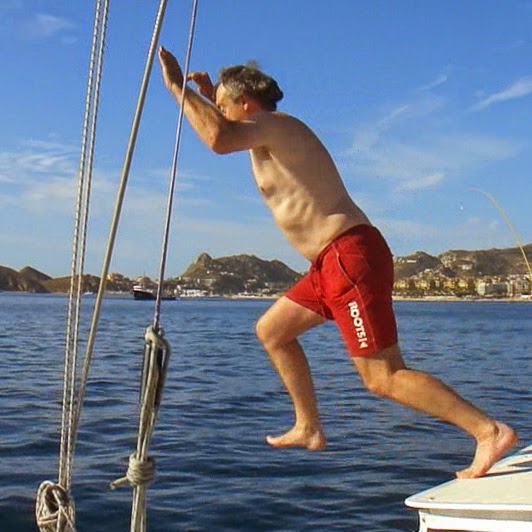 We also sent Manny up the mast so he could check it out (he does some climbing, but wasn’t too keen on being so high on a moving ship).  Nicky said we should bring him back down so we did. On the way into the marina, we motored past the large Princess cruise ship (with Manny threatening to moon the passengers) and swept along the western side of the bay waving at all the tourists, dodged water taxis, para-sailors and jet skis. 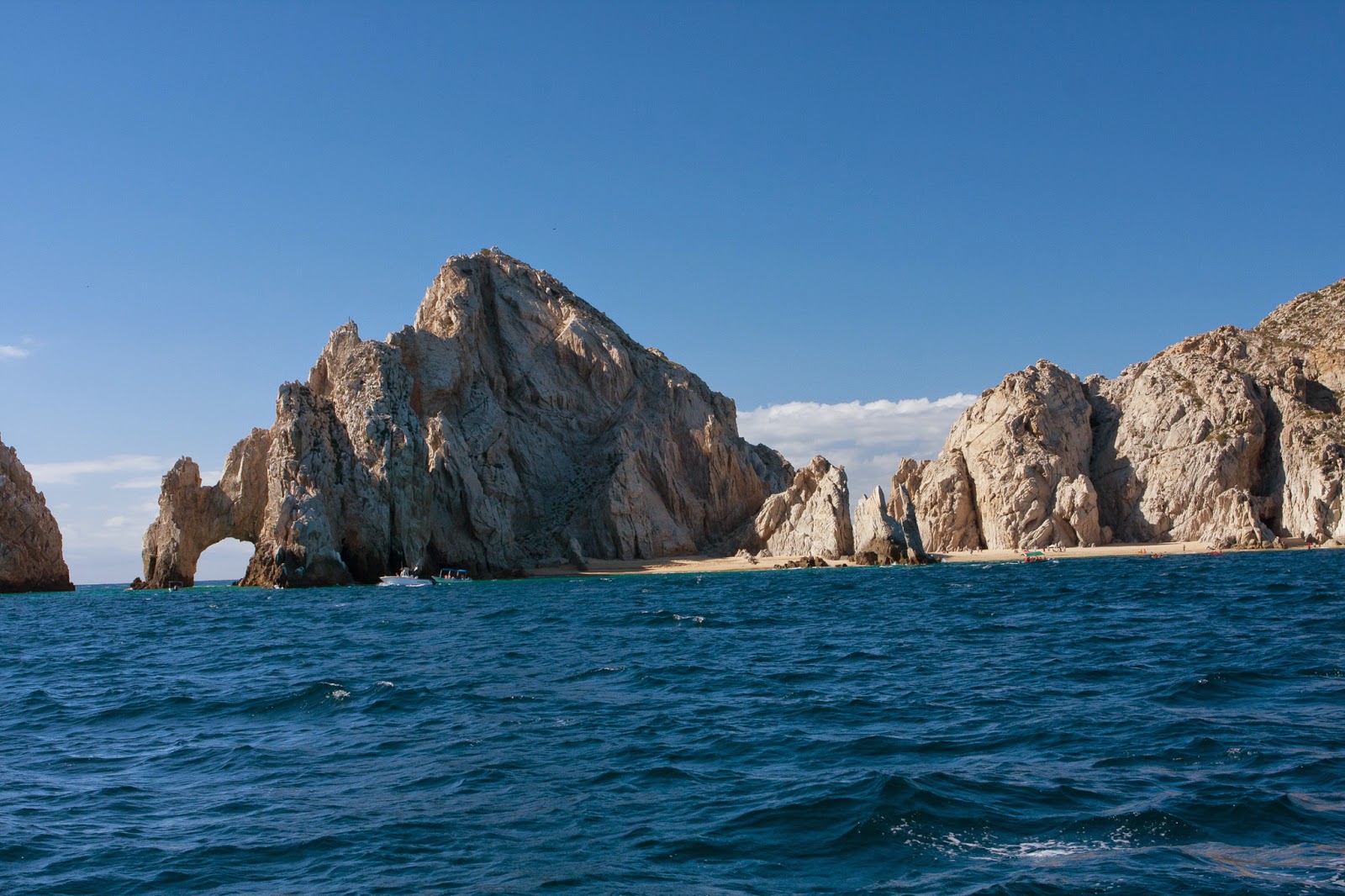 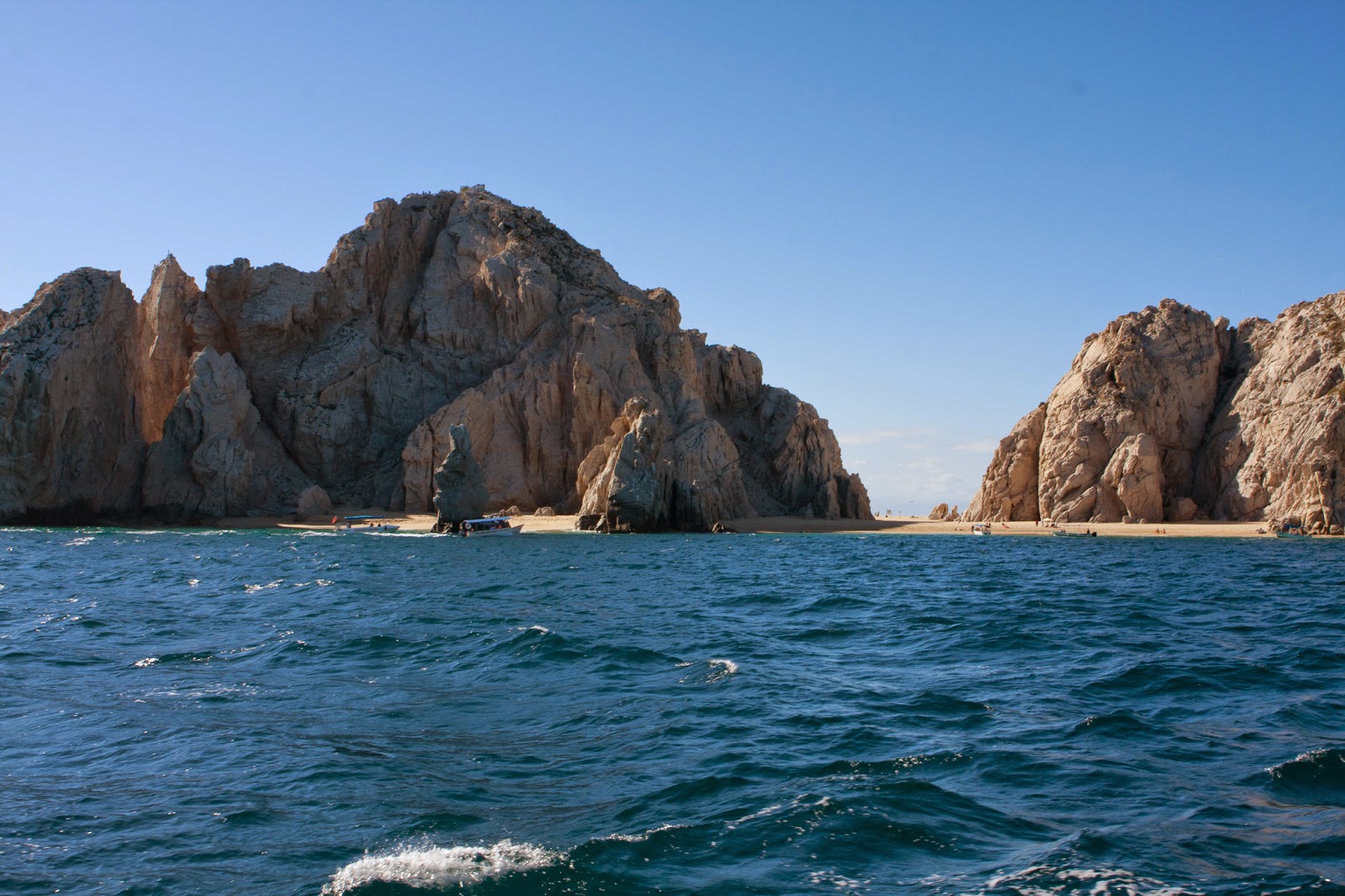 Instead of another meal prepared by Nicky, we ate lunch at a nice restaurant and then went to the airport to pick up Zophia.